The team visited Outlook in an effort to acquire data during a period of high flows. An above average snowpack in the Rocky Mountain headwaters facilitated flows of approximately 400 m3/s which were much higher than during previous visits (~ 70 m3/s).

A LISST, AquaScat, M9 aDcp and Isco sampler were used in a variety of different morphologic zones to characterise morphodynamics. This data will complement and expand on similar data collected in previous visits at lower flows. We now have a nicely rounded dataset covering a wide range of flow conditions. 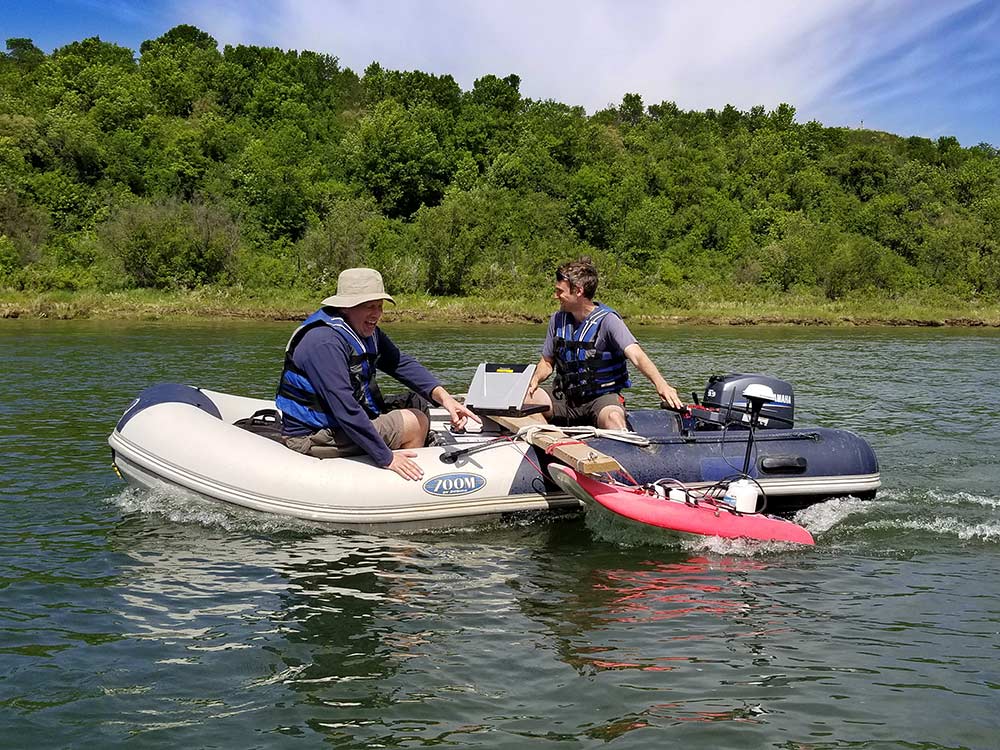 Surveying the South Saskatchewan with the M9 aDcp. Note that Andrew Nicholas is very excited (or scared) of Chris Unsworth's captain skills.

Two aerial photography sorties were flown 4-days apart to characterize movement of larger scale features such as unit bars over the entire study reach. These data are complemented by numerous eBee Plus and eBee RTK flights covering smaller areas but at a much higher frequency in order to quantify bedform migration rates. 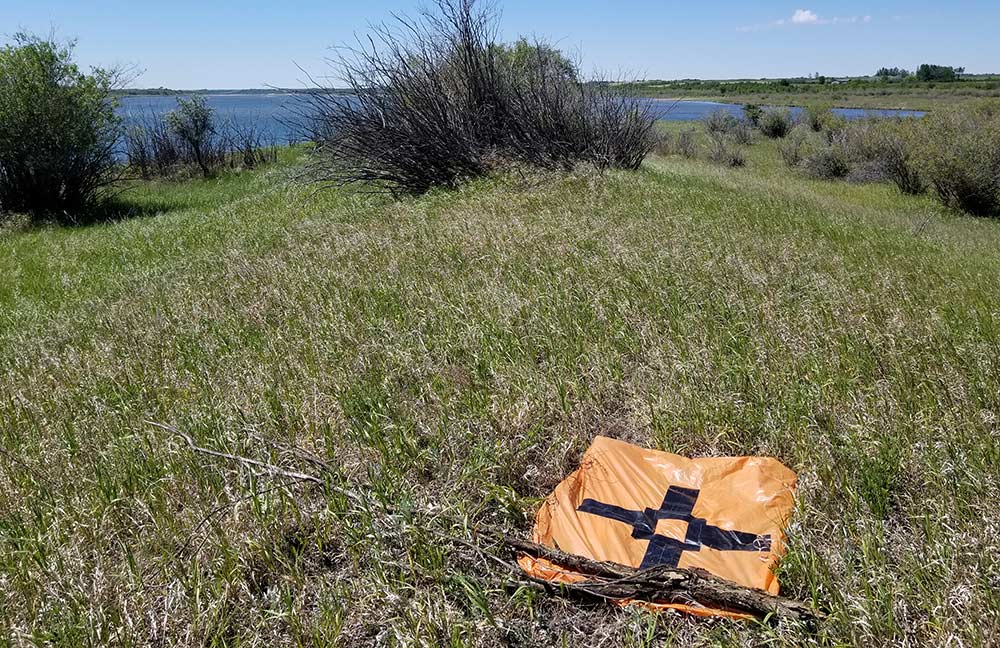 Ground control point for the aerial photography located on an island.

The use of high resolution imagery acquired by both traditional airplane platforms and UAV serve to generate baseline DEM's for use in the numerical modelling. Rob discussed some of the challenges associated with the generation of DEM's and what steps can be used to overcome them.

Abstracts for both talks are avaiable on the Outputs page.

The research team gathered for a two day meeting at the University of Birmingham to discuss progress and challenges after the two field campaigns. It was a good session where progress was made on finalising processing paramemters for both the UAV/airphoto morphometric mapping, as well the 2D and 3D modelling. 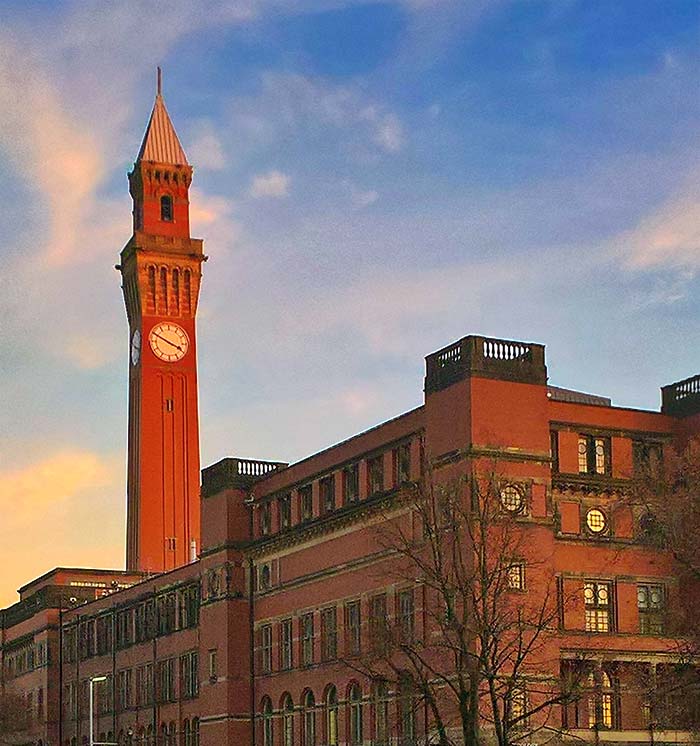 The regional newspaper, The Outlook, interviewed Greg Sambrook Smith about the teams ongoing research on the South Saskatchewan River.

A sampling frame was constructed that could be placed in the flow at a given location for extended periods of time. From this rig a variety of instruments could be attached to measure not only flow velocity changes, but also the character of sediment in transport. 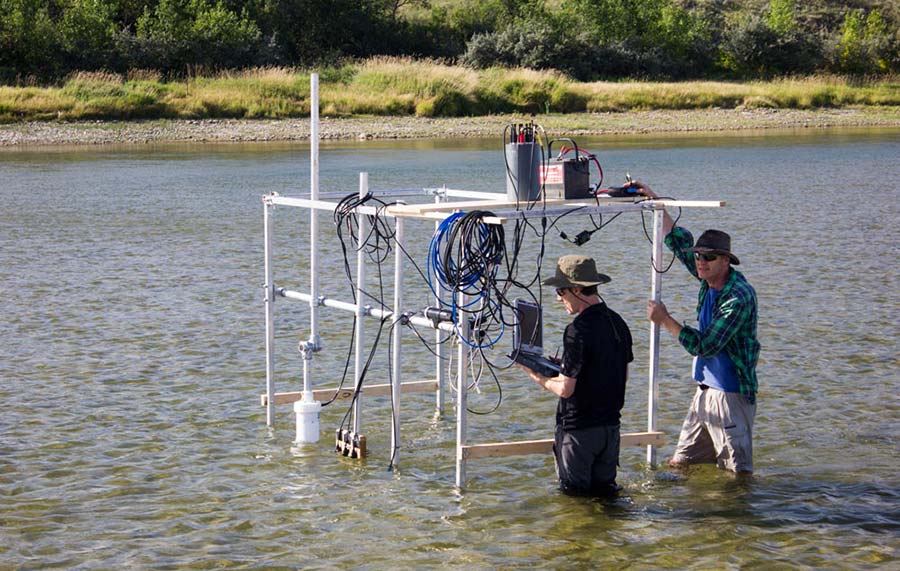 Chris Unsworth and Phil Ashworth setting up and testing the sampling rig with the M9 aDcp and AquaScat probes.

At various times a LISST, AquaScat, M9 aDcp and Isco sampler were all working in concert for long durations.

UAVs were once again used to survey areas to quantify bedform migration rates and directions. In addition to the DJI Phantom an eBee RTK fixed-wing UAV was used during this field campaign. This UAV can cover a larger area during each mission which allowed for coverage of more zones (confluence, diffluence and channel). 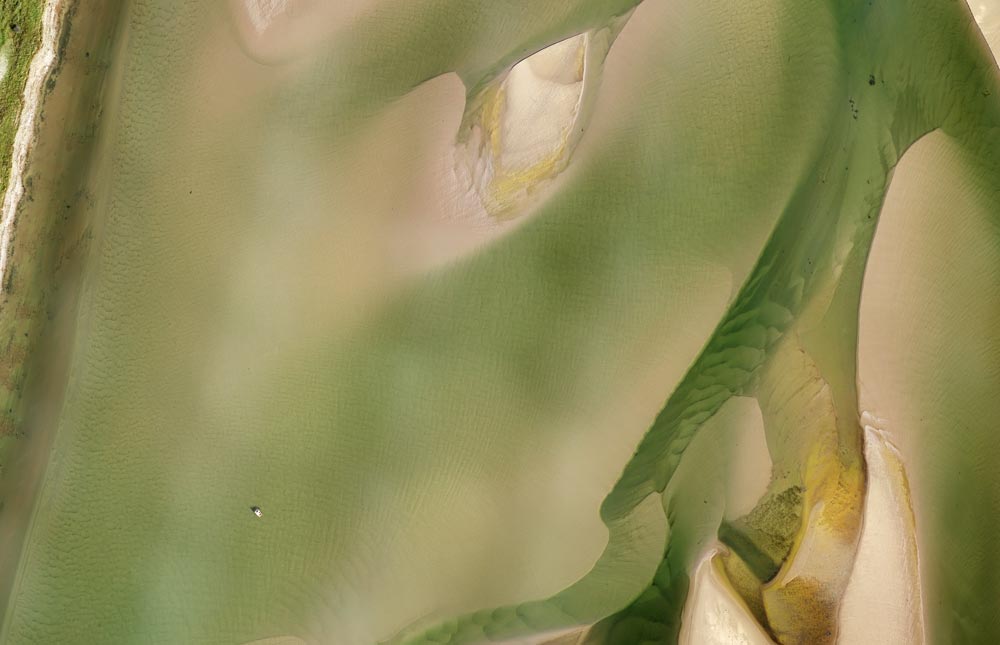 aDcp surveys were conducted in these new areas to quantify the proportion of flow using the various channels. This will be useful for the modelling as it will enable the correct allocation of flow to the multiple-channels.

The second field season built on the first and expanded into areas not previously studied. Another set of aerial photographs were flown at 6 cm resolution. The team expanded the area covered by GCPs which will allow for a larger DEM to be produced and used in various numerical models. 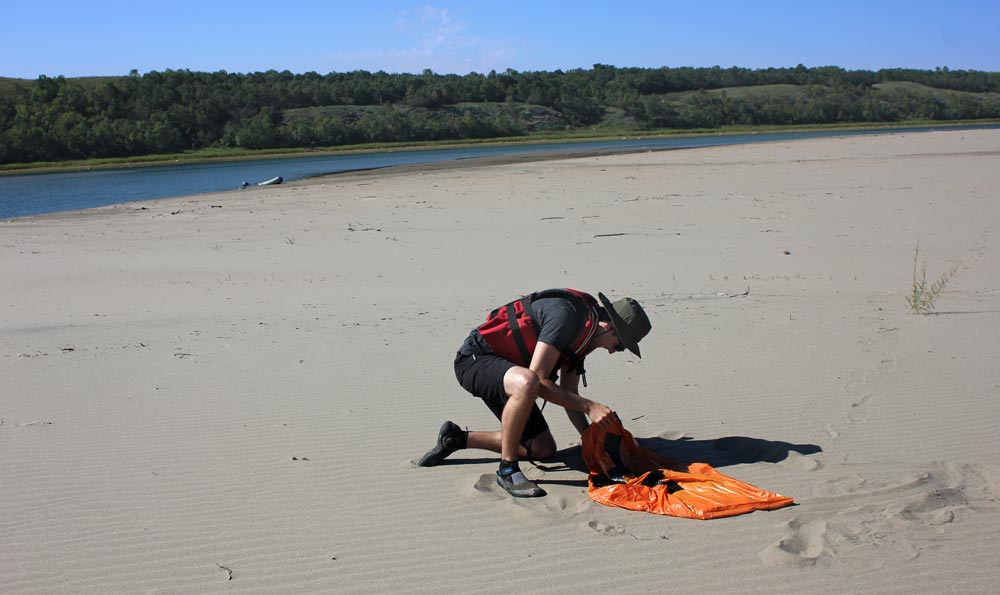 Chris Unsworth sets up a GCP in preparation for an aerial photograph mission that will cover an approximately 17 km long section of the river near the town of Outlook, Canada.

In late August, early September 2015 the entire research team carried out detailed surveys of flow, sediment transport and bedform dynamics over 17 days. The sampling strategy was designed to provide datasets quantifying morphodynamic linkages across bedform, unit bar and compound bar scales, over periods of days to years, and over the range of discharges needed for model development and evaluation (typically 50-250 m3s-1). We will extend our quantification of bedform and channel change to larger space and time scales (2000-2011) using DEMs generated from archive imagery. 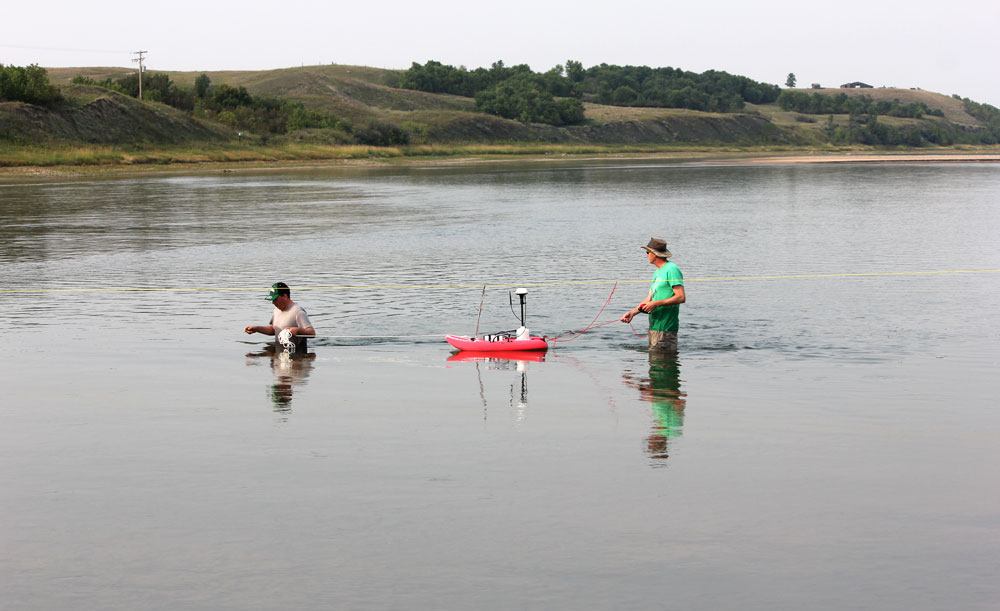 Repeat aDcp surveys were carried out by Andrew Nicholas and Phil Ashworth along numerous sections to determine discharge and changes in flow velocities.

Complementing the 6 cm aerial photos acquired in May a DJI Phantom UAV was used to fly smaller areas at high frequency in order to quantify bedform migration rates and patterns. Using the Pix4D Capture app each area was flown 8-10 times at an interval of approximately 30 minutes. 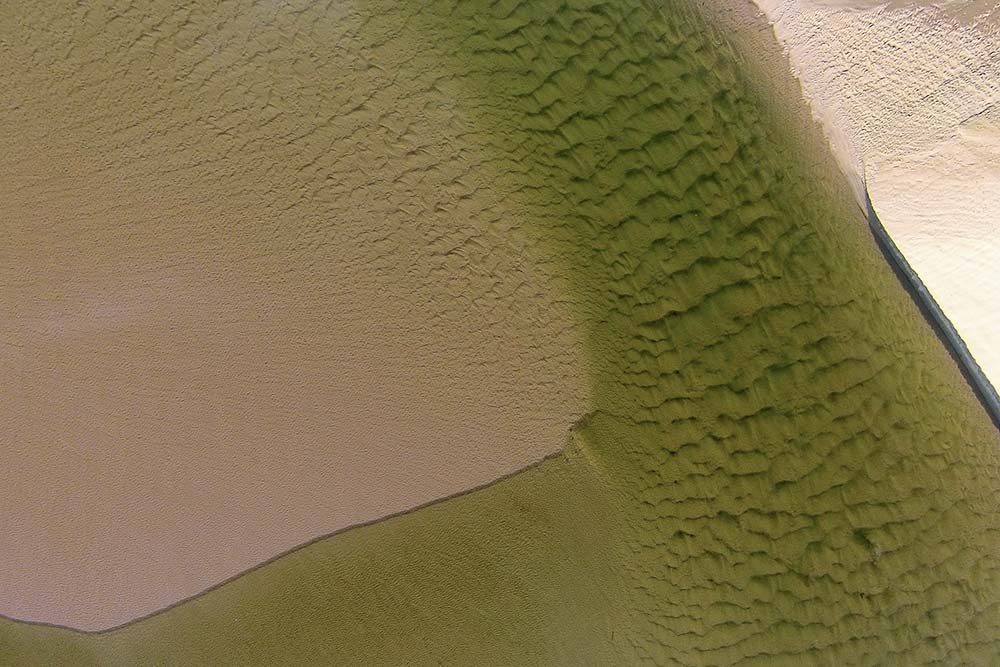 UAV image clearly showing the full range of bedforms below the water surface.

The first trip to the field site for part of the research team was undertaken in May. One of the main goals of the May field season was to acquire 6 cm resolution aerial photographs encompassing an approximately 17 km long reach of the river. These images allow comparison to previous imagery (yearly back to 2000) as well as provide a foundation from which a reach-scale DEM could be built for later numberical modelling. One of the main tasks was to distribute and survey using a dGPS ground control points (GCPs) throughout the area to provide both lateral and vertical control for image geo-rectification. 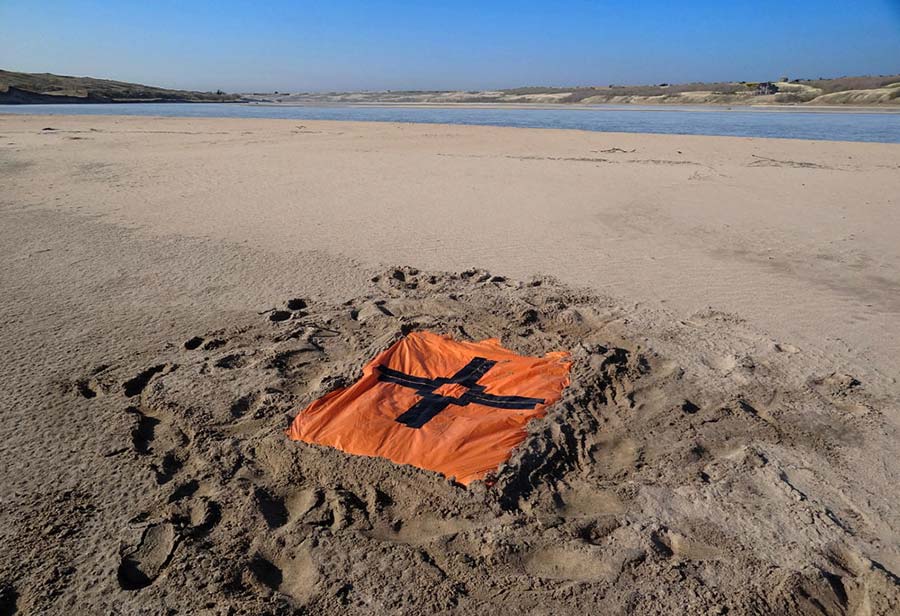 A ground control point positioned on a mid-channel bar to later be used for orthorectification of the aerial photographs.

In addition to the GCPs Andrew, Phil, Chris Unsworth and Chris Simpson spent 10-days setting up long-term instrumentation as well as testing inflow monitoring equipment such as ADCPs. 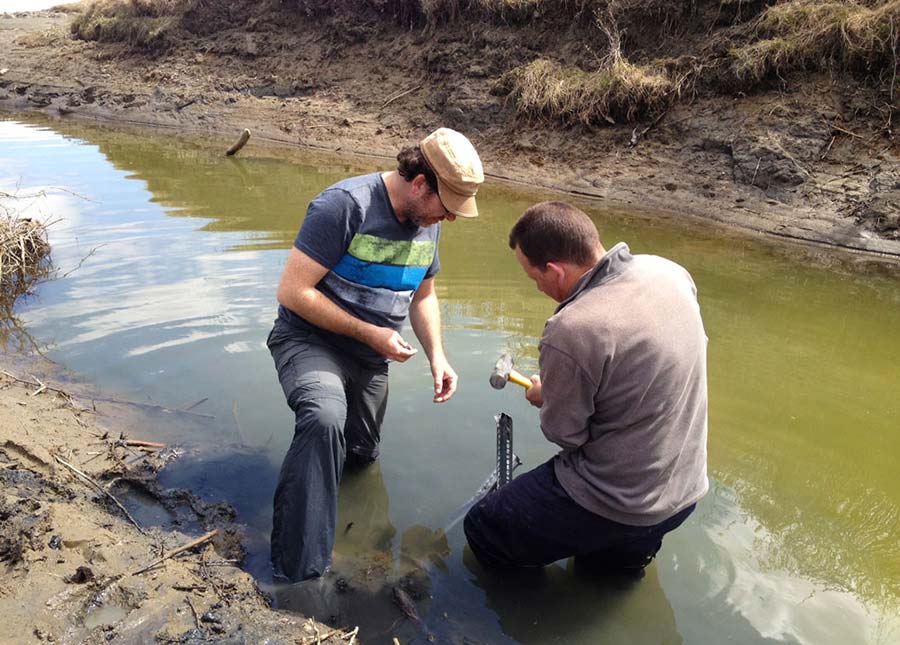 Andrew Nicholas and Chris Simpson install a Solinst levelogger at the upstream end of the reach to continuously measure water level for the duration of the project.

In early October Chris Simpson made a reconnaissance trip to Outlook to visit the research area. This allowed a preview of potential field sites and to establish local contacts for the 2015 field seasons. 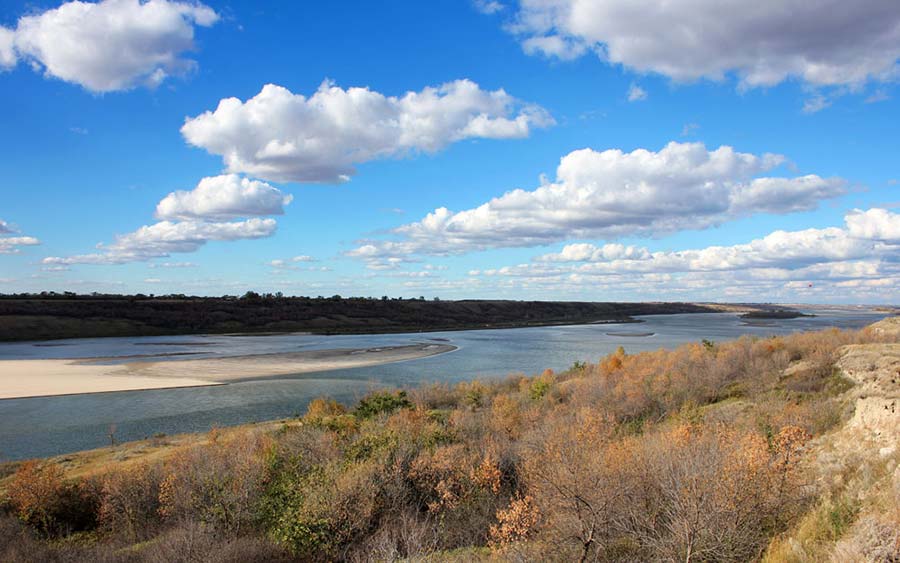 Downstream view of the sand-bed braiding South Saskatchewan River at the town of Outlook, Canada.

Preliminary testing was also done to determine the suitability of using Unmanned Aerial Vehicles (UAVs) to visualise the channel bed of the South Saskatchewan River. These early tests were encouraging and demonstrated that UAV surveys could enable rapid repeat surveys of bedform patterns and movements.